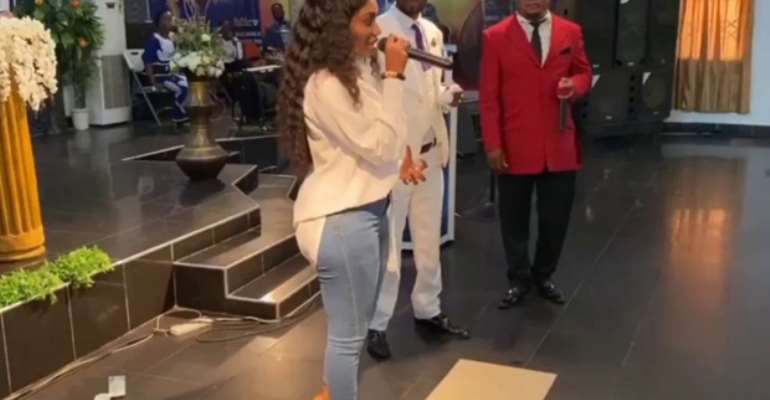 Wendy Shay visited Prophet Akwasi Appiah’s church on Sunday after he disclosed in one of his sermons that the singer would be kidnapped for 21 days.

According to him, the singer ‒ if she is not careful ‒ would later be killed for rituals and her body left to rot.

Many people who were not happy with the pastor’s words condemned him and the way he delivered his message.

However, Wendy Shay took to Twitter to plead with her followers and Ghanaians to rather remember her in their prayers instead of attacking the pastor.

“I have seen this video circulating and a lot of ppl are insulting the man of God… pls stop cos God reveals to redeem…remember me in ur prayers and pls if anybody has his number kindly inbox me Isaiah 54:17 #Mosthigh,” she wrote.

During the service, the singer revealed that she and her management had already heard of a similar prophecy.

Hence, Prophet Akwasi Appiah’s words, she said, was just a confirmation that there were unfortunate incidents ahead which she needed to work on.

She explained that her decision to worship with the church was not borne out of fear, but of her gratefulness to the Almighty.

Wendy Shay took the stage to lead a worship session.