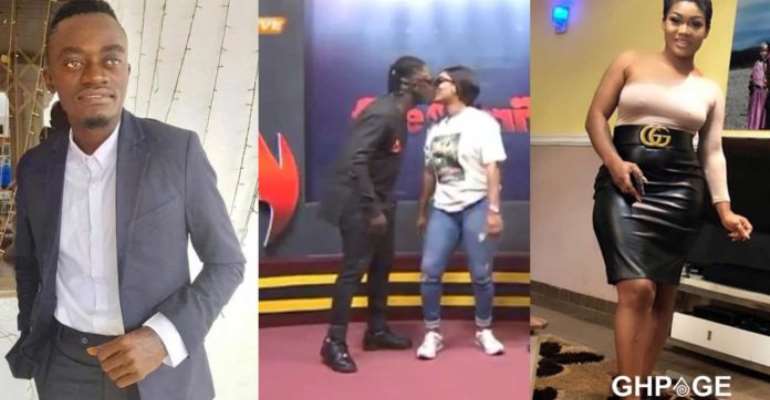 ‘Crazy’ sports presenter Countryman Songo today Friday 11th October 2019 got a fair share of what Kumawood comic actor Lil Win has been enjoying after breaking up with his wife.

Lil Win’s girlfriend Sandra Ababio and Famous Multimedia team were on the Countryman Songo’s show “Fire for fire” to create awareness on the premiere of the ‘Ghetto Hero’ movie which he(Countryman Songo) also featured in.

But thing took turns when Countryman Songo and Sandra Ababio locked their lips together to kiss each other for some time live on television.

The fire for fire presenter after the kiss stated that he knows people would read meanings into it but he is careless about what people think.

“By now someone has recorded and shared with the caption Songo and Sandra,” he said.

Watch the video below:

Kumawood actress Sandra Ababio is the lady behind the split between musician Guru and Lil Win.

According to some people. Guru has been dating Sandra for some time but his friend Lil Win snitched on him and snatched her away.

Till now both Guru and Lil Win have never spoken openly about the matter as they always try to sound nice when they are asked in interviews.