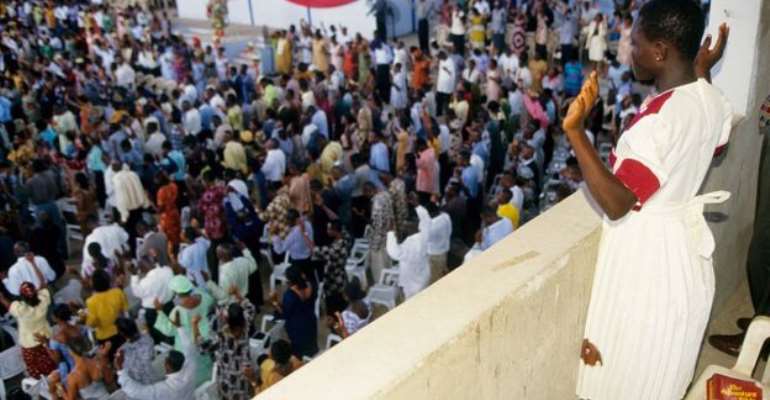 COVID-19 has clearly exposed the rebellion in the Church and the rebellion among God’s people. Till God made Saul King over Israel we didn’t read of his rebellious spirit. He went to war and thinking he cared more than God, ever compassionate than God, knew more than God defied the instruction of God to completely destroy Amalek. Saul’s evil was in the eyes of the Lord and not humans. A clear indication that what is evil in the eyes of the Lord is different from that which is evil in the eyes of men and women and vice versa.

Today, and in a COVID-19 Ghana, the same people who cannot defy the ‘secular orders’ of their ‘secular superiors’ says they will stay home even if their Church leadership direct for services to resume.

Not only that, they have openly harangued and with the help of new media freely published. Rebellion is in deeds and not words. This is also scriptural. Matthew 21:29-32 reads, 28 “What do you think? There was a man who had two sons. He went to the first and said, ‘Son, go and work today in the vineyard.’

29 “‘I will not,’ he answered, but later he changed his mind and went. 30 “Then the father went to the other son and said the same thing. He answered, ‘I will, sir,’ but he did not go. 31 “Which of the two did what his father wanted?” “The first,” they answered. Jesus said to them, “Truly I tell you, the tax collectors and the prostitutes are entering the kingdom of God ahead of you. 32 For John came to you to show you the way of righteousness, and you did not believe him, but the tax collectors and the prostitutes did. And even after you saw this, you did not repent and believe him.

These are the very same people who will allow their kids to go to school because the government of the day and of this world has ordered. These ‘rebels’ are wiser than their church leadership. The same well and fountain they are supposed to be drinking from and in whose grace they have their covering. The very same people who have been preaching that obedience is better than sacrifice now says to obey a directive from the Church leadership is to be foolish.

Thought you trusted your Church leadership with your spirituality? Or even by earthly standard your church is so reckless that you can’t entrust them with your physical wellbeing? Or you have come to realize your money matters to them than your life and your soul?

In any case, upon all your wisdom why you are with a Church that is reckless, careless of you and will lead you to your damnation than elevation? Why are you with a Church you can.t entrust fully and wholly with your spiritual direction, ordering and wellness?

Did you just realize that God is everywhere and that your body is the temple of God with your home being the Church? Or COVID-19 has limited your God and enhanced your thinking? Do you now worship God with caution and your wisdom? Or God has ceased using foolishness to confound the wisdom of this world?

At times leadership direction may not sound appealing and reasonable but that is the authority you have submitted to. I don’t think every decision of Jesus was reasonable to the disciples but they submitted. As we read the bible, the disciples questioned him on several occasions. Take the account of the woman with the alabaster jar of very expensive perfume for example.

When you are member of a Church, you suggest, you don’t decide. You leave decision making to those entrusted. It doesn’t matter if you are the most brilliant and accomplished or educated. Jesus decided for very accomplished men and women.

Truly, there are Churches that are not prepared. There are churches there current restrcitions won’t favour economically. It will be difficult for many services to adjust. But I guess that is why we are ‘gods.’ To make the impossible seem possible. These are also scriptural unless you want accounts.

It is better for the unprepared Churches to prepare before resuming. There is no need to rush and move with the wind simply because it is blowing. Some are due to lack of or inadequate resources. Others are merely leadership crisis. The thing is every proactive leadership can project and see ahead and make provision. But that is a subject for another day. Every proactive leader foresaw this coming. Again, some Churches who were loud and clear donating huge sums of money, some even to government claim they are now mobilising to retool their church so they can resume. This also for another time.

Some have genuine concerns to suspend Church services while others are merely moving with applause and acceptability as some did being all over seen to be doing good. There is no need picking on each other and appearing to be wise. Like Bishop Dag said, waiting is also part of the training. Wait till you retool or wait till it is all over.

What is a bit stunning is how some have suddenly resorted to issuing statements publicly. Some of these Churches didn’t issue anything to announce the suspension of their services in response to the ban then.

We are not running publicans Church. This is the Church of God and must be allowed to flow. In all, let the Church of God be victorious. There are many who are watching to see what will become of the Church. Many observers are also emerging from within. Some who will not appear to be foolish among friends and compatriots. Religion is stupid we know. The opium of the unwise masses.

If you can help a Church retool so they can resume, please do. We all do have a responsibility to build the Church we aspire and desire. Many churches are suffering and struggling. As you see wisdom in condemning the Church, see also wisdom in growing Churches.

I believe there is an opportunity in all of it. Small Churches have opportunity now to be vibrant and effective and strengthen services. I believe God is moved by numbers and the Church should be freely made to worship.

Suffice to say, ‘23for rebellion is like the sin of divination, and arrogance like the evil of idolatry. Because you have rejected the word of the LORD, he has rejected you as king.” 24Then Saul said to Samuel, “I have sinned. I violated the LORD’s command and your instructions. I was afraid of the people and so I gave in to them. 25Now I beg you, forgive my sin and come back with me, so that I may worship the LORD.” 26But Samuel said to him, “I will not go back with you. You have rejected the word of the LORD, and the LORD has rejected you as king over Israel!” 27As Samuel turned to leave, Saul caught hold of the hem of his robe, and it tore. 28Samuel said to him, “The LORD has torn the kingdom of Israel from you today and has given it to one of your neighbors–to one better than you. 29He who is the Glory of Israel does not lie or change his mind; for he is not a man, that he should change his mind.”