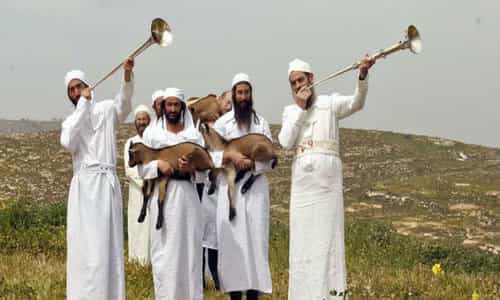 Share this article:
The Temple Institute is unrelentingly pulling out all the stops via a multi-faceted approach to ensure that the 3rd Jewish Temple will finally be built. If sheer zeal and commitment alone could accomplish the project, it would certainly have been accomplished a long while ago.
But as Andrew Tobin for the Times of Israel recently reported, the problem for proponents of this project is that the Temple Mount in the Old City of Jerusalem is sacred not only to Jews but to Muslims and Christians too.
The site includes the Dome of the Rock and the Al-Aqsa Mosque, two of the most significant shrines in Islam.
The Temple Institutes growth has coincided with increased mainstream support for Jewish access to the Temple Mount. A large minority of Israelis now opposes the restriction on Jewish prayer on the Temple Mount, according to polls.
The ardent drive to build continues to manifest in various ways. The Temple Institute, dedicated to rebuilding the ancient holy site, is now using new internet tools to bring its message to the masses.
A new YouTube video message titled Its Time To Build was released ahead of the Jewish fast day of Tisha BAv (which commemorates the Second Temples destruction in 70 CE by the Romans) as part of the Temple Institutes strategy of using the new tools of the internet to bring its ancient message to the masses.
The phrase encapsulates the groups controversial mission to rally Jews to reconstruct the temple that was the heart of their religion until its destruction 2,000 years ago.
Tobin further notes that over much of those two millennia, mourning the loss of the temple and longing for its restoration has been central to Jewish thought and practice.
Our goal is to raise the consciousness of the Jewish people and all humanity toward the central role that the holy temple plays in the life of mankind, Rabbi Chaim Richman, the Massachusetts-born co-founder and the international director of the Temple Institute said. Were very much focused on getting the message out on all the channels of social media and all the things people are into today. Most of my work is internet related.
The Temple Institute focuses on preparing the objects and skills needed for the sacrifice of animals and the esoteric rituals that were carried out by Kohanim, or priests, in front of crowds of Jewish pilgrims before the last temples destruction. All its work is led by a rabbinical council and based on meticulous analysis of Jewish scripture and academic research.
The institute has reconstructed nearly all the sacred vessels needed to perform the services in a rebuilt Temple, including the High Priests breastplate featuring the 12 precious stones of the tribes of Israel, the half-ton golden menorah and the musical instruments of the Levitical choir.
The group also works to build support for its mission and itself, which is where the internet comes in. After his cable television show that aired in Texas was canceled in 2006, Richman found an audience for his temple-centric scriptural exegesis online.
These days, his weekly TV and radio shows are among the 914 videos that appear on the Temple Institutes YouTube channel, which has more than 17,000 subscribers and 4.6 million views. The groups Facebook page has more than 186,000 followers. The Temple Institute email newsletter, which you can sign up for on its website, lands in 24,000 inboxes every week.
Most content is in English, to maximize reach, including to the many evangelical Christians who support the group, many through tax-exempt charities in the U.S. For many evangelicals, the construction of a third Temple fulfills a prophecy about the Second Coming of Jesus.
In a further demonstration of commitment to re-establishing the Holy Temple in Jerusalem, the Temple Institute announced it is opening a school for training Levitical priests for their eventual service in a new temple, based on a recent jta.org publication.
The institute ran several pilot programs in recent years and now is embarking on a mission to teach Kohanim all the practical skills required to serve in the Third Holy Temple, it said in a statement.
According to the Institute, the curriculum at the Nezer HaKodesh Institute for Kohanic Studies will include courses on the Temple service, theory and practice and the role and application of modern technology in the Third Temple.
In a separate report, David Israel for jewishpress.com noted that the curriculum at Nezer HaKodesh will also include courses such as The Sacred Temple Vessels  Aspects of Engineering and Design; and The Mathematics of the Holy Temple.
We are extremely excited to announce this new step toward the restoration of the Holy Temple service. We call first and foremost upon Kohanim worldwide to support this special project, which signifies a return to their birthright.
We have chosen to use IndieGogo as a tool to enable as many people as possible to be a part of this historic initiative, Rabbi Chaim Richman, international director of the Temple Institute, said in a statement.
Meanwhile, many Jews and Christians await with great anticipation the rebuilding of the 3rd Temple. For Jews, a long-held passionate desire to see the temple restored will finally be fulfilled.
For Christians, although there is some debate on the timing of the rebuilding of the temple the overall focus is more on the exciting impact of this eschatological event on Gods prophetic time-clock.
It will signal the imminent return of Jesus Christ as King of Kings and Lord of Lords, and the fulfillment of the new Heaven and the new Earth under His divine righteous and eternal rulership. (2 Peter 3:13; Revelation 21:1)

Probe election 2020 violence, the happenings were difficult to comprehend — Bono Chiefs to Commission of Enquiry