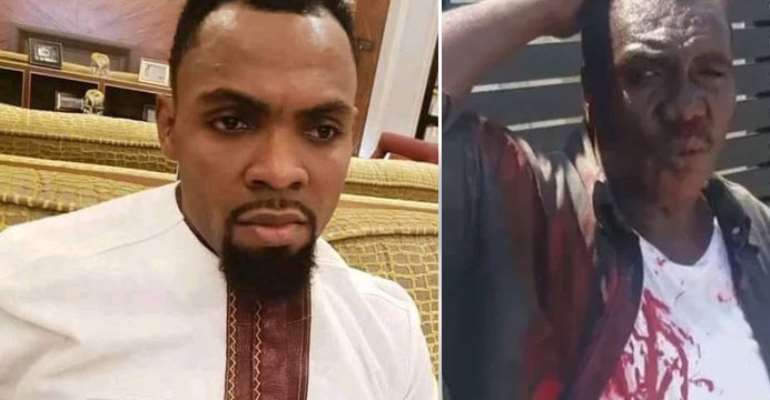 44 MINUTES AGO  GENERAL NEWS
Francis Antwi aka Rev. Obofour and one of the victim

The nasty incident occurred near Tema Community 18 Roundabout on Monday at about 11 am.

The MCE and her officers were on the premises of the church to inspect building permits and also collect property rates.

Officials of the assembly, particularly the Municipal Finance Officer (MFO), was hit in the rib with an object and his phone smashed, whilst the security officer of the MCE was also hit with a stick on his waist and head causing him to bleed profusely.

According to eyewitnesses, the MCE escaped unhurt because some city guards had to use their bodies to shield her into her car from the rampaging goons, but they managed to cause damage to the car in the process.

Dr. Nana Ato Arthur, Head of Local Government Services, at a news conference yesterday in Tema, condemned the action of Rev. Obofour’s church members and said they would ensure that anyone found culpable would be made to face the law.

He said as part of improving the assembly’s revenue mobilization, the MCE led a team made up of the head of works and taskforce, with five vehicles comprising pickups and the MCE’s Nissan Patrol vehicle in a convoy to collect property rates, building permits, among others.

He said his checks showed that Rev. Obofour had refused to honour five different summons issued by the assembly for him to produce building permits for the construction of the church and other facilities.

“Whilst at the church, the assembly officials requested their building permit documents which they failed to produce. The taskforce was then instructed to write on a portion of the church the inscription ‘Stop work and produce permit by TWMA,” he explained.

He said when TWMA tried to write on the building, some members of the church rushed on the assembly’s officials.

“They took their red paint and poured it on them. They closed their main entrance and started assaulting some of them with metals and sticks, and smashed their vehicles. The engineer, MFO and the rest of the taskforce received their fair share of the beatings and also smashed the vehicle of the engineer and his cell phone,” he narrated.

“We would like to inform Ghanaians that church/mosque are under the state and not the vice versa. In this regard, they are expected to act responsibly and desist from disobedience, violence and vigilantism,” he cautioned.

DAILY GUIDE learnt that five persons were apprehended and sent to the Sakumono District Police Headquarters where they are assisting in investigations.

“The said church in dispute does not also have any permit processing documents with TDC since the area the church is situated has been declared inhabitable for both residential and commercial purposes due to its closeness to a waterway that floods the whole area anytime it rains.”

Reports say Rev. Obofour was not on the premises of the church when the incident occurred.