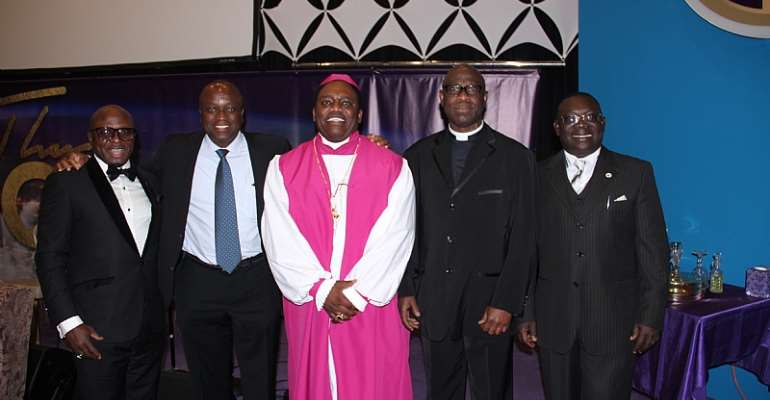 The presiding overseer of New York-based Revival and Sabbatical Evangelical Ministries was on Saturday, September 7th, consecrated as Bishop by the Kingdom Five-Fold Covenant Fellowship at a ceremony at the auditorium of the Kingdom Ambassadors Global Ministry in Long Island, New York.

The Presiding Prelate of the Kingdom Fivefold Ministry His Grace Bishop Paul C. Cockfield was joined by Archbishop John Praise Daniel, and Bishop Brehon Hall to perform the consecration.

Other ministers in attendance were Arch Bishop Antwi Boasiako, Bishop Adu-Gyamfi, Bishop O. Ekeoma Job, Apostle Ivry Johnson and a host of ministers from various parts of the world.

Nana Ahenkorah the CEO of Gold Coast African Market the largest African market in USA, Lawyers Ralph Desena of Suris and Associates and Bragoli and Associates, Renowned world doctors Dr.Sebastian Lattuga a spinologist in New YORK, Dr Micheal Obeng a plastic surgeon as well as royalty from the community were present to grace the occasion as special guests.

The staff of Kingsbrook Jewish hospital and Kings county hospital in. Brooklyn, where Bishop Dr. Amankwah and his wife worked earlier in their career, were represented.

In his message, Bishop Cockfield said “ In a time when we are facing unprecedented challenges in the Kingdom it is refreshing to see men and women rising to the challenge by desiring a good work” He also admonished the gathering that the ascension to the Bishopric is a high call to service with tremendous administrative responsibilities.

Bishop Dr. Akwasi Adu Amankwah and Bishop Eli Daniel were the two candidates who took the oath of office and consecrated as Bishops after going through months of catechism and episcopal preparation.

The Bishops elect were joined by family and friends from their various ministries as they took the oath of office before the Prelate and co consecrators.

With over 28 years in ministry Bishop Akwasi Adu Amankwah is a man of God with the demonstration of the works of the Holy Spirit through miracles, signs, and wonders. He is also an international evangelist and has ministered in many parts of the world especially Asia. He started ministry in 1991 in Moscow and Volgograd in the former Soviet union where he was as an ordained international Evangelist. By 1996 He had have traveled to almost 22 countries preaching and having crusades

The renowned man of God was the 1st preacher to hold a crusade in Volgograd city in Russia at the sports stadium and was also the first missionary in Uzbekistan, Krasnodar, Kharkov and stravoporl and Sochi in Russia. His crusade in 1991 transformed Russia. Whilst in medical school in Russia he survived an attack on his life when someone pointed a pistol in his mouth for preaching the gospel.

He started ministering on New York-based Amansan radio in 2015 and every Friday night he leads the Prayer Army of Christ a Ministry he founded on a prayer line reaching as many as 11, 000 people in 94 countries.

God through his ministry has led many people to Christ. The work of God has led him to meet some notable people including the Presidents of Guinea, Russia, Ukraine Ghana, Benin as well as royalties including Asanteman.

Bishop Dr. Amankwah is a medical Doctor by training and trains a lot of Doctors preparing for USMLE exams clinical skills at GoldUSMLEreview in Houston and New York. He is also currently the Director of Evangelism for Europe and Asia for the Kingdom Fivefold Covenant Fellowship.

He is married to Mrs. Jennifer Amankwah, a prophetess of God and blessed with two children, Gideon 21 years and Angelica 17 years.

At the end of the ceremony, Dr. Amankwah expressed his profound appreciation to the Revival Prayer Army of Christ Movement, all ministers, friends, family, coworkers, school mates and all loved ones in Ghana and to SAVIOUR church of Ghana his mother church with special gratitude to his dear uncle Opanyin Abraham Adusei .