Posted By: johnsonon: May 30, 2021In: Religion SectionNo Comments
Print Email 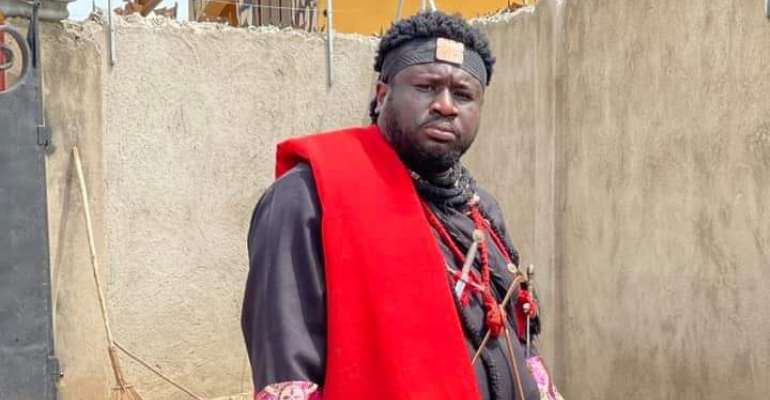 Odeefuɔ Kwabena Asiamah, the founder of the Ajagurajah Movement in Ghana says blood covenant and offering of blood sacrifices to God frees one from bondage.

The offering of blood sacrifices is a practice where certain animals are sacrificed on the altar of a deity or God in return for blessings and other assistance.

Commonly called Ajagurajah, he revealed that blood covenant is what seals the covenant between humans and God and it is based on this that God is able to act on set one free from physical and spiritual difficulties.

Quoting Zechariah 9:11 which says, “Because of the covenant I made with you, sealed with blood, I will free your prisoners from death in a waterless dungeon.”

Expatiating on the above, he said when one offers the blood of an animal as sacrifices to God, it is based on such show of reverence to God, which energises the spirit of God rescues one from going to prison or from any predicament that can bring shame or ignominy.

He added, “David offered blood sacrifice unto the Lord by slaughtering sheep and cow. When he had an affair with someone’s wife, God said he is a man after his own heart.”

To support his point, he referenced Psalm 50:5 which says, “Gather my saints together to Me, those who have made a covenant with me by sacrifice.

In explaining, Ajagurajah said the Lord instructed that all his saints should be gathered unto him those who have a covenant with him through blood sacrifice. “He did not ask sacrifice through offering money but by blood sacrifice. It is that which build a covenant between God and his people”.

He made these revelations to his followers on his official Facebook page called the “Ajagurajah Movement”.

In furtherance of his view on the importance of blood covenant, Odeefuɔ Asiamah underscored that after the flood, as reported by the Bible, Noah performed a sacrifice unto God.

Referencing from the Bible he quoted Genesis 8:20-21 which says, “Then Noah built an altar to the Lord and taking some of all the clean animals and clean birds, he sacrificed burnt offerings on it.

According to him, the Lord smelled the pleasing aroma and said in his heart: “Never again will I curse the ground because of humans, even though every inclination of the human heart is evil from childhood. And never again will I destroy all living creatures, as I have done.”

He explained that, Noah offered burnt offering to the Lord, and the aroma of the offering compelled God to say that, “He shall not destroy the world again.”

According to the man of God, he has a covenant with his senior angel Ajagurajah to protect him at all times from evil and calamities of life. “Because of this, I have to do what I have to do as and when the time is due.”

He stressed, “These are covenants humans can have with God and it has existed from biblical times till now. However, one can have a blood covenant with the devil as well.”

In my next write up, I shall focus on his interpretation of how humans can have a blood covenant with the devil.