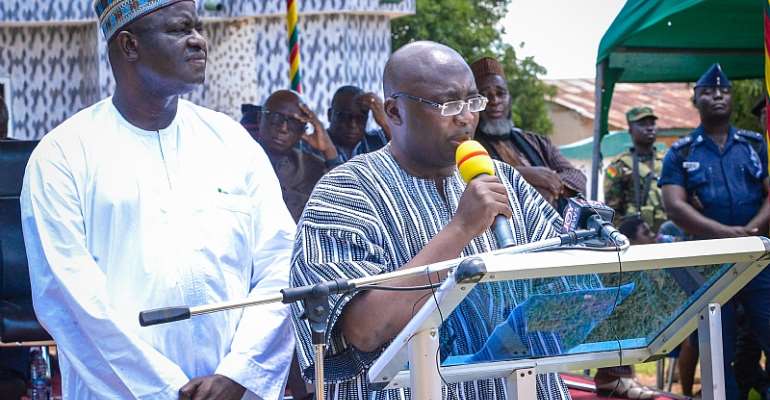 The Vice President, Dr. Mahamudu Bawumia has indicated that construction of the Pwalugu dam will be the single largest investment made by any government in Northern Ghana since independence.

Addressing a gathering of family members, friends and sympathizers at the 40 day Adua of the late Upper West Regional Chief Imam, Alhaji Yakubu Issahaku, at Wa on Saturday, 31st August, 2019, Dr. Bawumia stressed that “it is government’s objective to end the perennial flooding that occurs as a result of the Bagre Dam in Burkina Faso while providing irrigation and hydro power for the people of Northern Ghana”.

Vice President Bawumia informed the chiefs and people of Wa that preparations for the commencement of the dam construction has been made and sod-cutting shall commence soon.

“I am happy to announce that formal groundbreaking ceremony for construction works to begin on the multipurpose dam at Pwalugu in the Upper East region is expected to take place in November”, he noted.

Construction of the dam, which has been on the drawing board since independence, has become imperative due to the annual floods and deaths that occur in the areas that are within the flow-way of the Bagre Dam from upstream Burkina Faso. According to officials of the Upper East Region, 7,488.94 hectares of farms were destroyed by floods whilst livestock were carried away in the waters in 2018.

Sensitisation and evacuation plans have already began in the Pwalugu flood area, following plans by the Burkinabe authorities to open the dam in a few days.

When completed, the multipurpose Pwalugu dam will have an elevation of 165M near the Pwalugu Bridge on the White Volta River and with a maximum reservoir area of 350KM2. The project will also have a powerhouse consisting of two turbines with 60MW of installed capacity and 16.5MW of firm continuous capacity as well as, a 15KM overhead line for export of power to an existing transmission line.

It also comes with a twenty five thousand-hectare irrigation scheme— the country’s biggest so far and almost double the 12,980 hectares of land under irrigation in Ghana. According to experts, this will boost annual rice production by up to 117,000 tonnes and maize by up to 49,000 tonnes in Ghana. Included in the anticipated production boost are other crops like tomatoes, sugar, sweet potato, sweet pepper, and onions.

The dam will also be a source of water supply to communities in the catchment area.

Aside the thousands of jobs to be created for those who will be engaged to build the project, it will also have a solar component to balance hydro energy with solar power to enhance reliability of supply.

Among other benefits, the completed dam would reduce the cost of power distribution to the northern regions of Ghana while industrialisation, modern commercial agriculture and value chain activities as well as the general socio-economic environment, would be given a push.