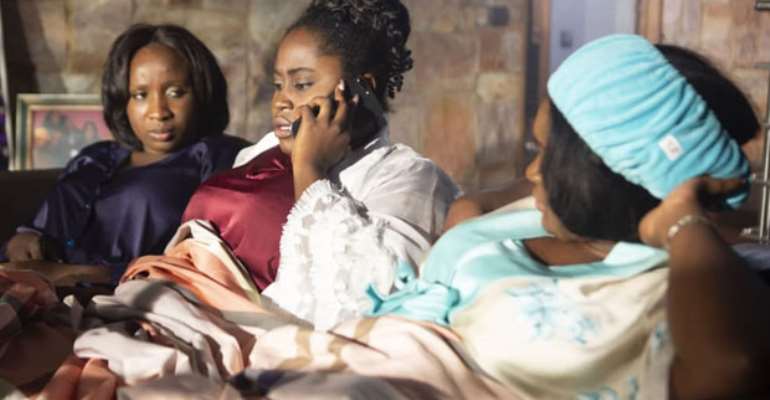 Naa Ashorkor, Lydia Froson and Jackie Appiah in a scene of the upcoming movie

It’s always a challenge and risky to put a sequel to a classic, even if it comes 10 years after the original. But Sparrow Pictures believes it can break the box office success it chalked 10 years ago with the original production—with a captivating storyline that would not only bring back memories but create new enduring ones.

‘The Perfect Picture’ was about three beautiful women pushing their 30s and making bold attempts to change their lives even when destiny plays its joke on them.

In ‘The Perfect Picture -Ten Years Later’, the girls are back, pushing their 40s and their lives haven’t lost one spark of the drama they had 10 years ago.

In fact, these girls are older, wiser and saddled with more issues in their not so fairy-tale relationships. It’s the roller-coaster ride of imperfect husbands, repentant ex-boyfriends, financial woes and sexual liberation with a touch of a miracle that drives the spirit of their stories.

Written by Shirley Frimpong-Manso, ‘The Perfect Picture -Ten Years Later’ is also directed by her along with Ken Attoh and produced by the powerhouse duo.

“Been prepping for this for ten years, I can’t wait till everyone sees the magic we are creating,” Shirley Frimpong-Manso stated in a release on Wednesday.

“This is a great opportunity to outdo a classic while creating another classic. The Perfect Picture – Ten Years Later’ will be visually stunning. Ken Attoh

with its vibrant costume, indigenous music and unique locations, ‘The Perfect Picture – Ten Years Later’ has been endorsed and included as part of the celebration for ‘Year of Return’ in support of the campaign to position Ghana as a key travel destination for African-Americans and the African diaspora.

The film is expected to be outdoored in a grand premiere in Ghana at the Labadi Beach Hotel on Sunday, December 1, 2019, before making it to Silverbird Cinemas in Ghana on December 14, and in Nigeria on December 20. It would also show regionally across Ghana and in cinemas and festivals around the world.

The cast of the movie were unveiled at ceremony on Wednesday at the La Villa Boutique Hotel in Accra.