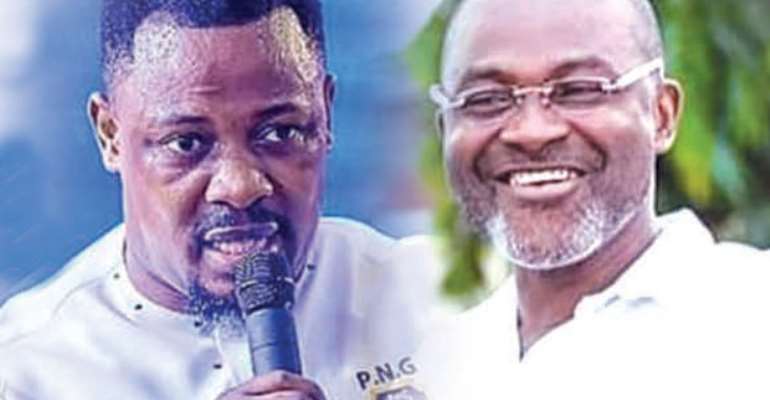 KENNEDY AGYAPONG has turned the heat on Prophet Nigel Gaisie, accusing him of ‘rape’ and also indulging in ‘fraudulent’ activities, for which reasons he does not merit to be called a servant of God.

According to the firebrand politician, the leader of the Prophetic Hill Chapel has duped several top dignitaries in the country under the guise of prophesying for them, disclosing that Prophet Nigel’s long list of ‘victims’ even included ex-President John Mahama.

Mr. Agyapong, who is the Member of Parliament (MP) for Assin Central, also alleged that Prophet Nigel clandestinely orchestrated the death of young music star, Ebony, claiming that the musician died prematurely.

The New Patriotic Party (NPP) MP alleged that Prophet Nigel is an occultist, fake and a womanizer, who usually uses some pretty ladies to set people up, especially those that have found out about his tricks and are ready to expose him in order to shut them up.

Mr. Agyapong said Prophet Nigel had relied on fake prophecies and tricks to dupe his unsuspecting congregation in order to amass wealth and said he had been bonking beautiful ladies of different shapes.

The outspoken lawmaker, who has started a personal crusade to expose all fake pastors in the country, stressed that he had damning information about Prophet Nigel, promising to release them in the coming days.

Mr. Agyapong, it would be recalled, had been using the SEAT SHOW aired on Monday and Wednesday evenings on his ‘NET2 Television’, to ‘strip’ some men of God, whom he deemed as fake and naked, with hardcore evidence.

So far, several pastors in the country have been at the receiving end of Mr. Agyapong’s outbursts, with the leader of the International God’s Way Church, Bishop Daniel Obinim, who claims to be an angel, being the worst victim.

Prophet Emmanuel Badu Kobi, Pastor Love and Nakoa Isaac have all tasted the MP’s ‘venom’ apart from Obinim, and it is now the turn of the NDC’s darling pastor, Nigel.

The Assin Central lawmaker, who is determined to end what he calls dirty works of fake pastors, at a point, diverted a bit from the Christian faith and attacked a famous fetish Priestess, Nana Agradaa, describing her also as fake.

Reports making rounds indicated that some ‘fake’ pastors in the country had secretly appealed to people that were close to Mr. Agyapong to beg him (Kennedy) on their behalf so he (Kennedy) would not throw his spotlight on them.

Mr. Agyapong himself has on countless occasions disclosed that some fake men of God like Pastor Love and Nakoa Isaac, who are scared of being exposed by him (Kennedy), have contacted his friends to beg him on their behalf.

Commencing his crusade to strip Prophet Nigel naked, Mr. Agyapong said “this fake prophet had a field day in the past to trick and dupe ex-President Mahama, especially when he (Mahama) was in political office.”

He said Prophet Nigel, who had virtually turned ex-President Mahama into a remote that he controlled, once told Mr. Mahama to produce seven gallons of water for him (Nigel) to use for special prayers and direction for him.

Mr. Agyapong said Prophet Nigel left six of the gallons of water with Mr. Mahama and took the remaining one to his church, where he sold it to his church members, claiming it was special water from River Jordan in Israel.

“Mr. Mahama, let me tell you, the vehicle that you gave to your girlfriend Linda, she naively offered it (car) as an offering to Prophet Nigel. He used people around you to get information to give you fake prophecies all the time,” he pointed out.

Mr. Agyapong also made a damning revelation by alleging that young female music sensation, Ebony, who died through a gory road accident on the Sunyani to Kumasi road, perished because of Prophet Nigel.

Prophet Nigel is reported to have prophesied about the looming death of Ebony, who was then the queen of music in the country, and few months later the fast-rising musician lost her life alongside two others, including a soldier, sparking public outrage.

“Prophet Nigel, you are the prime suspect in the death of Ebony. I have evidence so get ready,” he fired, adding, “Prophet Nigel started to make a lot of money after Ebony died due to his prediction. I have evidence; you set the girl up and the evidence is coming for you to see; you have no power.”

Again, Mr. Agyapong alleged that Prophet Nigel once raped a certain lady and the case was kept under the carpet, because the NDC, of which the beleaguered prophet is a prominent member, was in political office.

He stated that the rape victim was still around and ready to testify, saying “I will do my utmost best to ensure justice for the lady. Nobody is above the law; I’m also not above the law.”

Mr. Agyapong also alleged that Prophet Nigel could not close his zip as he has freely been bonking women from different backgrounds with the influence of his ‘dirty’ money that he had amassed from ‘naïve’ people.

According to the MP, the NDC Prophet has bonked many ladies in his church, as well as some respected and influential women in the country.

“Those that Prophet Nigel has managed to bonk include aspiring MPs, top actresses and radio presenters, including a female staff of NET2, who was holding two bottles of champagne before Prophet Nigel bonked her,” the MP claimed.

Mr. Agyapong accused Prophet Nigel of being an occultist, alleging that Prophet Nigel and two of his junior pastors buried a sword in his church during the night to help the church flourish, saying “I have pictures of you and two of your pastors burying a sword inside your church auditorium for occult reasons, and I am ready to show the pictures on this television network for everybody to see on Monday evening.”

The Assin Central MP also said Prophet Nigel was a known blackmailer, who usually relied on pretty girls to get close and take nude pictures of men, notably ex-young pastors of Prophet Nigel, that have threatened to expose him, saying “I know someone that has concrete evidence to expose Prophet Nigel. This prophet hired a lady to take nude pictures of this man. They sent the photos to the man, his mother and brother and threatened to make them public if he dared open his mouth.”

According to him, Bishop Nigel has committed several crimes but got away with them because his beloved NDC, in power, offered him protection.

Mr. Agyapong said he had started an arduous task of compiling the list of all the people that had fallen prey to Bishop Nigel’s ‘dirty’ works, noting that latest by Monday the list would be ready.

Meanwhile, a popular songstress and television star, Mzbel, who is reported to have strong issues with Prophet Nigel, seems to be happy about Mr. Agyapong’s decision to finally expose the dirty works of Prophet Nigel.

Mzbel is reported to have boldly posted ‘Vindicated’ on her Facebook wall, immediately after the outspoken Assin Central lawmaker had released the supposed fraudulent activities of Prophet Nigel on the ‘Seat Show’ on ‘NET2 TV’.

She said on social media later that the ‘problem’ she has with Nigel Gaisie has been resolved but added that anytime she meets the prophet and he makes any move she will slap him.

In a related development, Prophet Nigel, in a video that had gone viral on social media platforms, seemed to have fought back over the attacks on him.

Some have claimed the video is old but an angry-looking Prophet Nigel was captured spilling insults, which some claim was in reaction to Mr. Agyapong’s outbursts.

In the video, Prophet Nigel, said some Ghanaians were jealous, who only spew rubbish about genuine men of God like himself, warning such people to stop or be cursed.

According to him, the scriptures have stated that people that accuse men of God wrongly would surely be cursed; therefore, the public should take note and give the needed respect to men of God in the country.

“Shut up and let us do the work of God,” he yelled, asking “do you know the indicators to determine a fake pastor?” saying, “The Bible says by their fruits we shall know them, so examine the person by his/her fruits.”

According to him, some people have a lot of girlfriends outside their marriage, yet they have the audacity to accuse men of God of fornication. “You have girlfriends so you think pastors are also doing same,” he fired.

Prophet Nigel, however, admitted that even though he was a man of God, he is a human being so he has feelings like everyone; therefore, he could go wrong once a while “but that does not mean I am not a genuine man of God.”

He stated that God called him (Nigel) to do his work at a tender age of 13 to 14, and he has served God faithfully since that time, noting that he would have faded from the system long time ago if he had not been a genuine man of God.