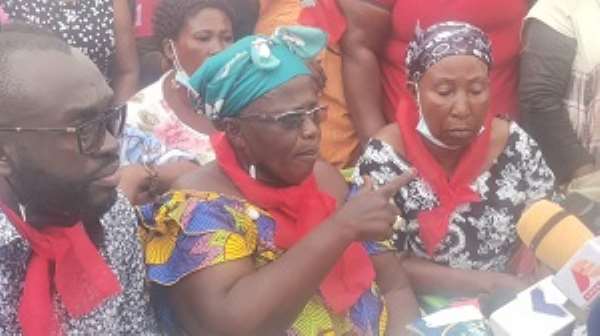 There were chaotic scenes, wailing and curses on Monday, September 13, 2021, at the Ashanti Regional Coordinating Council (RCC) begun evicting traders from Kumasi Central Market to pave way for the completion of the ongoing phase two of the Kejetia/Central Market Redevelopment project.

Some traders who were evicted said they have regretted campaigning and voting massively for President Nana Akufo-Addo in the 2020 general elections.

The traders who invaded some principal streets of Kumasi amidst wailing, insults and curses on the Regional Minister, Kumasi City Authorities as well as President Akufo-Addo lambasted them for forcibly ejecting them from the market without providing them with proper place to enable the ply their trade.

Speaking to this reporter, some of the aggrieved traders explained that they have been left stranded after the Ashanti Regional Minister Simon Osei Mensah asked them to park out from the facility to the Racecourse Market

The traders however disclosed that there were no such place for over 2000 of them to work at the Racecourse Market as claimed by authorities in the Region.

There was a struggle for space on Monday morning at the Race Course area following the relocation as many traders complained of lack of space.

The Ashanti Regional Minister Simon Osei tasked the KMA, to relocate the traders to pave way for the second phase of the Kejetia Redevelopment project.

According to the Hon Osei Mensah, apart from the Race Course Market, many of the traders who were affected during the recent demolition exercise carried out by the Kumasi Metropolitan Assembly (KMA) have also been successfully relocated to other satellite markets within the metropolis, including the Afia Kobi Serwaa Ampem Market, popularly known as Abinkyi Market.

Currently, Contracta, the Brazilian construction firm executing the project, is half way through the project, hence the need to as a matter of urgency relocate the remaining traders for work on the market to be completed.

So far 1,300 traders have been temporarily moved to the Race Course Market, awaiting an estimated 4,000 second-hand clothes sellers and 3,500 shop owners who are to relocate to satellite markets for the project to be completed on schedule.

He stated that although President Nana Addo Dankwa Akufo-Addo, together with the Asantehene, Otumfuo Osei Tutu II, cut the sod in May 2019 for work to begin on phase two of the project, it was not until March 2020 that the first batch of traders agreed to move from the market.

The Regional Minister said there was no way authorities would sit aloof and allow the project to be further delayed for fear of breaching the agreement, considering its repercussions.

He appealed to the affected traders to conduct themselves well in the upcoming demolition exercise for the smooth and timely completion of the much-anticipated project, which will help decongest the Central Business District of Kumasi.

But the aggrieved traders have expressed disappointment that the assembly failed to do the demarcations before embarking on the eviction exercise.

“We obeyed the directive of the KMA to come here, but we have been asked to leave the land for them to demarcate it for us. We had already struggled for space. Why should you order us to leave,” a trader told this reporter.

“Where should we go and sell now because the Race Course area is not ready and you have asked us to relocate from where we were selling, now we have become stranded,” another trader bemoaned.