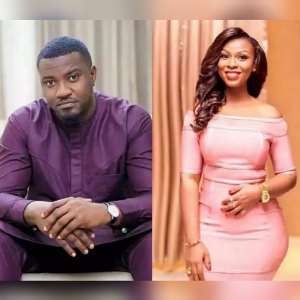 A-list actor and aspiring politician John Dumelo has opened up on his marriage to Gifty Mawunya Nkornu and also the news that, his wife gave birth 6 months after they got married.

John Dumelo who was a guest on Yvonne Okoro’s cooking show ‘Dining with Cooks and Braggarts’ said his wife’s pregnant just happened because he didn’t plan it.

John admitted on the show that, he was dating colleague actor, James Gardiner’s cousin, Frances before meeting his wife.

Detailing his relationship with Gifty Mawunya now Mrs Dumelo, he said that he knew her for a couple of years and they were just friends because Gifty was also dating somebody else by then.

The prolific actor did not, however, mention if he broke up with Frances before starting any relationship with Gifty but he stated that “things just did not go on well”.

Speaking about his marriage which came as a surprise to dozens of his fans and with reports that he never informed his ex of his the upcoming nuptials, John said that he actually informed Frances before tying the not.

“Well I did, I think it’s just the honourable thing to do, just to say this is what it is,” he told Yvonne Okoro and added that at the time of informing Frances about his marriage, they weren’t dating.