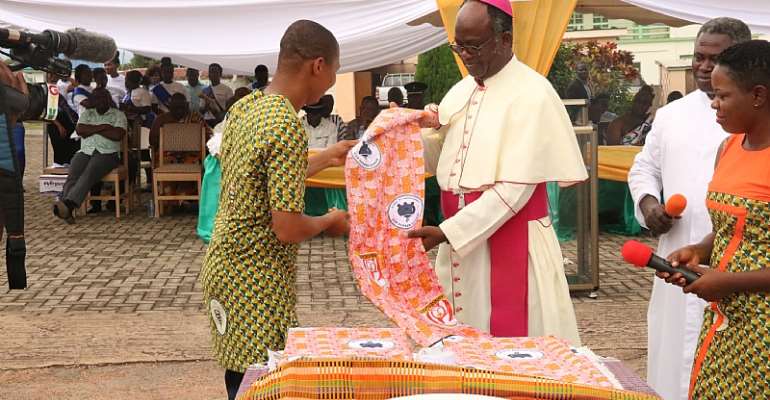 Bishop Emmanuel Kofi Fianu of the Catholic Diocese of Ho in the Volta Region, has launched the 60th Anniversary of the Margret Marquart Catholic Hospital in Kpando lauding the facility for giving quality health service to the poor and underprivileged in society in line with Jesus’ healing Ministry.

Bishop Fianu, who is also the Episcopal Chairman for Health in Ghana, said September 11 that for the past six decades, the hospital had not only expanded physically as an institution but it has become a diver of quality health service in Ghana.

The Clinic currently shares the same working space with the Ante-natal Clinic (ANC), hence the need to build a permanent structure for the promotion of children’s health and their families and pre-empt illness or preferably diagnose them at an early stage.

I view that, Bishop Fianu appealed to Catholics and stakeholders to support the building of a Child Welfare Clinic (CWC) for children who receive health care from the facility. The GHc100, 000 Clinic when completed and commissioned during the anniversary climax on September 25, 2020, will serve as a monument for the hospital.

The primary purpose of the Clinic is to provide immunization, growth, and monitoring, mental and social development and support the emotional attachment with their parents.

Bishop Fianu said the Margret Marquart Hospital has demonstrated commitment to the health needs of the people, perseverance and resilience in the pursuit of quality and excellence, hence need to be supported to achieve its anniversary project.

He noted that the current world economic down turn and the declaration of Ghana as a low middle income country, had brought about dwindling external and internal supports to health facilities in the Ho Diocese and the country as a whole.

“We are faced with the reality of sole responsibility in the provision of infrastructure, equipment and health commodities for service delivery from internally generated funds,” he added.

He pointed out that the collective efforts of the past and present staff had endured the Hospital the test of time as well as the generous supports of the Church, development partners, successive governments of Ghana and the Chiefs and people of Kpando.

He paid glowing tribute to the Grail Sisters from Germany led by Dr. Maria Margret Marquart for bringing health care to Kpando. The hospital was established by Dr. Marquart on February 2 1960 with sisters Phili Fucks and Anita Lininger of the Grail Movement, all of Germany.

Bishop Fianu unveiled the 60th Anniversary which is on the theme: 60 Years of Resilient Catholic Health System in Kpando; Honouring the past, celebrating the Present and building the Future.

Mr. Emmanuel Hanson Torde, the Hospital Administrator, said the Clinic, currently shared the same working space with the Ante-natal Clinic (ANC), hence the need to build a permanent structure for the promotion of children’s health and their families and pre-empt illness or preferably diagnose them at an early stage.

He noted that the primary purpose of the Clinic is to provide immunization, growth, and monitoring, mental and social development and support the emotional attachment with their parents.

In a message read on his behalf, Mr. George Adjei, Director of the Directorate of Health at the National Catholic Secretariat, Accra, recognised the strategic role and contribution of the hospital and being at the fore front of health care delivery in the country.

Rev. Johnson Avuletey, the Deputy Volta Regional Minister who represented the Regional Minister, thanked the Catholic Church for its many health facilities and assured that government would continue embarking on proactive policies and programmes with stakeholders, to ensure access to basic quality health service delivery.

He called on stakeholders- the State, Church, community and health professionals to re-commit themselves to the ideals and principles that underlined quality healthcare delivery.

On her, part, Madam Dela Sowah, the Member of Parliament for Kpando, praised the hospital as being one of the neatest in the Ghana and commended the Management and Staff for making the facility conducive for clients.

He commended the vision of building the Child Welfare Clinic, saying that children were the future of the nation and priority must be placed on them. She supported the project with ten percent of the total cost.

Mr. Elvis Djampoh, the Kpando Municipal Chief Executive said the hospital has had a positive influence on Ghanaians and commended management and staff for their dedication and commitment to duty.

He said the hospital has aided the Municipal Assembly in its mandate of reducing the problems of health services delivery and rated the hospital as referral centre against in spite of the limited resources.