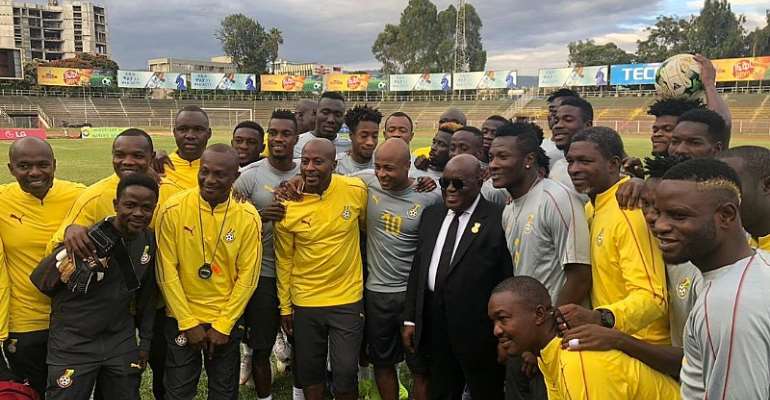 President Akufo-Addo has solicited the support of Chief Executive Officers (CEOs) of banks in the country for the senior national football team, Black Stars, as they prepare to participate in the 2022 African cup of Nations (Afcon) and compete for a place in the world cup to be hosted by Qatar, in June next year.

At a breakfast meeting with CEOs of banks doing business in Ghana at the Jubilee House today the 30th of April 2021, President Akufo-Addo said the Ghana Black Stars under the leadership of the current coach, C. K. Akornor, is poised to make history after forty (40) years since the team last won the continental thropy, but they do need the help of corporate Ghana to do so.

On Monday, the 26th of April 2021, the President in similar fashion, met with Chief Executive Officers (CEOs) of top companies doing business in Ghana to assist government in raising a total of twenty-five million dollars ($25,000,000.00) for the senior national football team, Black Stars, as they prepare for the two tournaments in 2022.

In the 26th of April meeting as well as that of today, the 30th of April, the President indicated that even before the COVID-19 Pandemic, government alone could not have raised the targeted 25 million dollars. He noted that government has committed to contribute ten million dollars ($10,000,000.00), which means that corporate Ghana must assist in raising the remaining fifteen million dollars ($15,000,000.00), to make the participation of the Black Stars for the two major upcoming tournaments in 2022 a smooth one.

“There is the national coach himself, C. K. Akornor, supported very much by Sammy Kufour, they are the young people spearheading our efforts. I think that if we are in a position to support them, I am very confident that they will bring back the golden fleece” President Akufo-Addo said in his remarks to the bank CEOs.

Mansa Nettey, Chief Executive Officer of Standard Chartered. Bank, and President of the Ghana Association of Bankers, in a brief remark on behalf of her colleagues told the President that they are pleased to have been invited by the President for breakfast. She added that they have heard the plea of the President and that they will seek his leave to go and consult with their various board of directors and principals in order to formalize whatever support they may be able to offer the senior national football team, the Black Stars.

“We understand the request but we are also requesting that given the short notice, we see that there are pledge forms in front of us but we will ask that we go back and consult our various boards, and principals and come back to you if that is ok. We are honoured and on behalf of my colleagues, we thank you for inviting us to this breakfast” Mansa Nettey said.

Minister for Youth and Sports, Mustapha Ussif, in his brief remarks noted that sports financing has become an important issue in every sports loving country such as Ghana. He noted that even though there has be a considerable increase in the budgetary allocation to the Sport Ministy by government, there is still the need to engineer alternatives financing models for the Sports ministry.

“It is eventually clear that there is linkage between corporate support to our national team and performance and as we seek to replicate these memorable performances in the past, we will surely require their [corporate Ghana] ones again” Mustapha Ussif said.

Akufo-Addo, Bawumia mourn with Baako as he bid farewell to his late mother