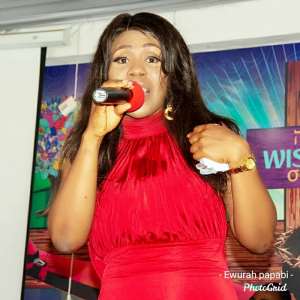 The management, team members, and fans of Marian Abena Yamoah, one of the fastest rising gospel artistes in the country, have heaped praises on the artiste for earning two nominations in this year’s Ghana National Gospel Music Awards.

The songs nominated are ‘Ose Ayeyi’ as promising artist, ‘Nyame aye bi’ as best collaboration of the year.

In a statement issued and signed by Kwabena Nortey, the Artiste Manager, it said although the artiste has received the nominations with warmth and excitement, she would nonetheless not allow the nomination to cloud her ambition to use gospel music to win more souls for Christ.

“She believes her musical career has a long-standing connection with Jesus, and therefore, fame, and accolades that come with music would never stand her way in winning more souls for Christ with her soul-touching lyrics, rhythm and content.

“We are using this medium to appeal to Ghanaians, gospel lovers, and Christians in general to patronize her songs as contained in her album which was launched in Accra last year at ICGC KRATOS Temple.

“For the fans out there, we want to urge you to continue to support the artiste to come out with quality music. Her desire has always been to reach out to you the fans with powerful songs, meaningful enough to improve your thinking, attitude and circumstances in the name of Christ. This would continue in the years ahead as we all commit ourselves and rededicate our unflinching love to worshiping the saviour.

“For the fans, friends, and family, vote for Marian Abena Yamoah a.k.a Ewurahgold to win the two categories mentioned above.

“We are certain that considering the number of tracks released, as contained in the maiden album, two out of the four, been nominated for the awards, she would win all her categories,” the team noted.

Ewurah Gold launched her maiden album on 10/11/19 in Accra at the ICGC Kratos Temple.