On the Transmogrification of Nana Agradaa, Minister of God 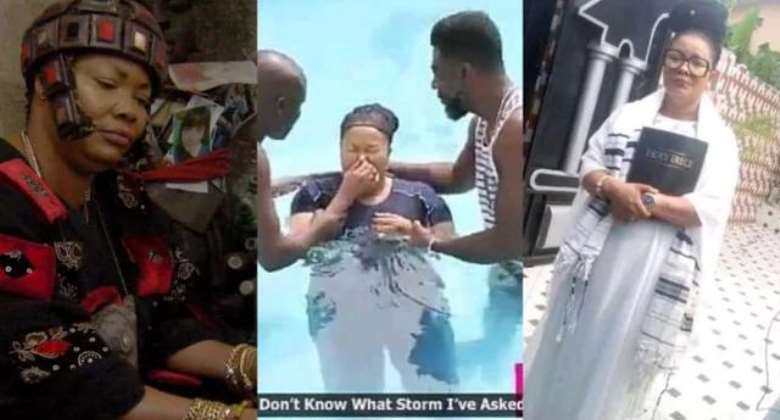 I remember when I traveled home to Ghana in 2020, my late wife and I used to watch Nana Agradaa as a comic character on her TV channel. Her claim that she could double money for people was so other-worldly that it constituted a great source of risible entertainment for us. She claimed incredulously that she could make money rise like Gari, a local dish known to double in size upon being soaked in water. She claimed that the more people spent their money via her boon, the more the money would multiply for them. In later years, whenever I wired huge sums of money to my wife in Ghana to build her house, she would exclaim jokingly, “Sike Gari, yeedi na eetu.” We always found that lady’s hyperbolic antics to be too incredulous to think that people could be so naïve to believe her, and actually send their money to her to double for them. To say the least, we were stumped.

But unsurprisingly, Agradaa eventually run afoul of the law and was briefly incarcerated. After being freed on bail, she purchased a magnificent church and recently had herself inducted as ‘Vangerist Doctor Reverend Bishop Mama Pat. On the day of her coronation, thousands of Ghanaians, including notable bishops, prelates, traditional chiefs and celebrities honored the ceremony. I took time to watch most of the event live on YouTube. I also listened to the number of people who called into a program to condemn her, stating that her conversion was a ruse to engage in further fraudulent activities to fleece the people.

The first point in issue is that the law is a grey area on fraud by false pretenses which could be triggered to produce a conviction in the activities of Agradaa. The victim of fraud under false pretenses has to have engaged in a lawful activity, because the law requires as proof that the victim engaged in a lawful and reasonable contract. The intention of the one who approaches another to double money for him is not that clear since he will be engaging in an illegal contract which is a nullity in law. With that kind of dirty mind, the same person cannot approach the law with dirty hands to seek justice.

To wit, there might not be a recourse for any of these gullible people who Agradaa was able to dupe, unless they plead mental incapacity; or that Agradaa infused them with some barbiturates. Or else they should know that a person doubling anybody’s money could well be engaged in the criminality of minting fake currency. There is no fundamental difference between a person printing fake money and doubling same. If a person goes to someone with the expectation that his money could be doubled, that person could have both the mens rea and the actus rea to be convicted of a crime. And ignorance of the law is no excuse.

The second point is that the rule of engagement here is not different from those who go to church and pay tithes and offerings. They are convinced that whatever they pay into the church’s kitty will yield thousandfold of money or blessings for them. And so, they proceed in faith to donate heavily to the church. If they get disappointed and grow poorer, they cannot demand their refunds from the pastors, and they have no recourse to the law either.

Once in the early days of my immigration practice, a client’s immigration application stalled because he had a drunk driving record on his rap sheet. I was trying to file a waiver application for him to overcome the problem, and he needed to pay me my fee for the filing of that particular legal device. But he told me point blank that he could not pay the fee because all the money he had left was his tithe which he must pay to his church. Ostensibly, his pastor had convinced him that God was going to pull a miracle for him. He was finally deported to Ghana. But she has no recourse to the law against his pastor…..

When I spent years procuring a relief for a guy to acquire a foreign residence, he instructed me not to open the letter containing his card. He took it to his pastor and paid thrice the money he paid me as fees to the church, all to the Glory of God for enabling his VAWA application to succeed. One day, if his ill-founded faith fails, he will also not have any recourse to the law.

This brings me to my third point that there is no different between the fraudulence in the church and the fraudulence in the shrine. Everything is a scam. There is no God. There are no spirits. There are no witches. There is no ritual that can bring in juju money. There can be no miracle except by magical tricks. There is nothing like angels, dwarfs, ghosts, demons, devils…..And so all those claiming to be ministers of God with supernatural capabilities are liars. And as the Reverend Obofuor once said, any claim to the ministry is false because no God has appointed any of his ministers. The ministers of God themselves claim that they have been appointed by God, but there is no witness to that claim. In a sense therefore, one minister of God is not above another. They are all liars. There is no difference in fraudulence, whether in church or in the shrine.

This brings us to our fourth and final point: The conversion of Agradaa. She epitomizes a false upgrade to a more acceptable form of fraudulence, leaving the raffia skirt and the horse tail for the colorful habits of the church. And because of the irrational theology of the church, it has no choice but to accept her as one of their own: The church accepts that there is no sinner beyond redemption. And there are several songs backing the assertion that no matter one’s sins, God forgives all. In fact the prophet Isaiah impugns that even if our sins are as red as scarlet, God will forgive us. The Apostle Paul, after involving himself in the murder of Christians, became the main theologian of Christianity. Finally, when the Pharisees approached Jesus with a woman caught in sin, Jesus told them that he who had no sin should throw the first stone. God embraces all kinds of sinners.

Under all the foregoing, how dare the church reject Agradaa? Is Agradaa not also entitled to the remission of sin? Is she not also capable of redemption through the blood of Christ?

There are those who are claiming that her conversion is not genuine. Have they now manufactured a litmus test to determine a genuine and ungenuine repentance? Don’t they claim that only God knows? Or that everybody will be judged according to his or her deeds? Thou shalt not judge or else, you will be judged, says the Christ.

The forgoing arguments alluded to by the Bishop who inducted the ‘Vangerist, make sense when viewed according to the context of church theology. In that context, we accept as true those things which people claim to be, to have seen, or heard and leave the rest to God.

The logic in Christianity, that of faith, belief without reason or reasoning, miracles and forgiveness of sins, they all play in favor of the latest “Vangerist in town. We should all shut up and watch the melodrama now in vogue. We have no monopoly over God’s grace, nor do we have any franchise over his name. We do not own any copyright over the scriptures of God. And we cannot claim that God has given us any credentialling authority to invest anybody or to qualify ministers to perform his service. Touch not God’s anointed. For all have sinned and come short of the glory of God.

Dr. Samuel Adjei Sarfo, Esq. is an attorney in Austin, Texas, USA. You can email him at lawyersarfo@yahoo.com.