STIB said the man was inebriated and that the metro wagon had been pulled from circulation and disinfected. Credit: @Mous_taffe/Twitter

Videos of a man with a mouth mask spreading saliva on a support pole on a Brussels metro train have gone viral and prompted a response from transport company STIB.

In footage posted on Twitter, a man can be seen taking off his mouth mask and putting his hand in his mouth before rubbing his fingers on the pole in front of him.

At least two fellow commuters captured the man’s action on video and posted it online, with one warning commuters to be wary and saying the man’s act was “nuts.”

The incident comes as public concern over the spread of the new Covid-19 coronavirus in Belgium mounts, and as authorities urge citizens to constantly wash their hands and avoid close contact with others as they strive to prevent a wider contagion. 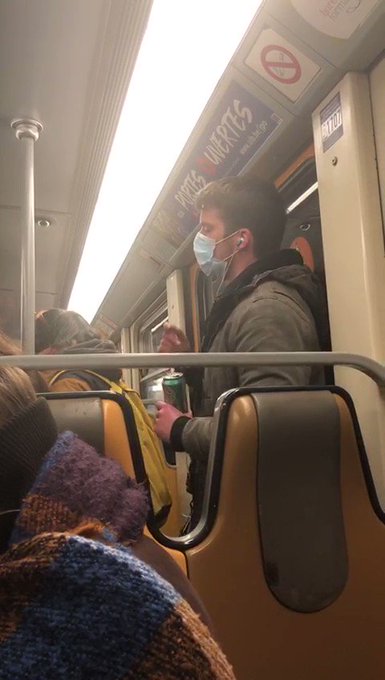 9,520 people are talking about this

Public transport company STIB did not immediately reply to a request for comment but reacted to one of the videos posted on Twitter, saying the man was in a state of inebriation and was detained.

One of the videos posted on Twitter shows him holding a beer with one hand as he rubs the pole with the other.

“The man (in a state of inebriation) was stopped by police and by our security services,” STIB wrote. “The metro wagon was pulled from circulation to be disinfected.”

“Our metros are cleaned every day,” the company added.