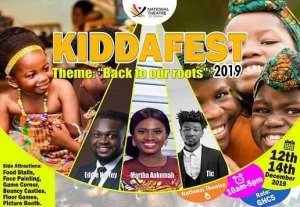 The 2019 edition of the annual children’s show, Kiddafest, has been scheduled to take place on December 12 to 14.

This was announced by the event organisers – National Theatre of Ghana.

It would be held under the theme: “Back to Our Roots.”

A statement issued and copied to the Ghana News Agency said selected children across the Greater Accra region were expected to perform in various theatre segments such as drama, dance and music, poetry recital as well as painting, among others this year.

It said the intention of the organisers was to bring back the good old days of entertainment by featuring as many stars, especially those who emanated from its previous Kiddafest events while educating children on the Ghanaian culture.

Kiddafest emanated from Funworld, a monthly children’s show initiated in the 1990s.

The statement said, as one of the oldest children’s shows, Kiddafest had unearthed several talents who now featured prominently at national and international levels in various aspects of theatre such as film, music, dance, drama, and artistic performances, among others.

“Mention could be of musical stars like Buk Bak, Shata Wale, 4X4 and Tic Tac among others as talents and stars that emerged from Funworld and Kiddafest.”

It said it, therefore, hoped that children who would be featured would become the future stars of the performing arts industry.