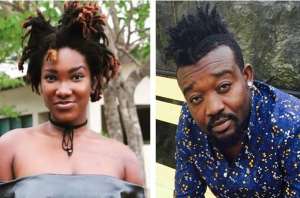 Speaking on “Behind the Fame with Lexis Bill” on “Drive Time” on Monday, Bullet explained that even though he and the artiste had their disagreements, it was nothing major for Ebony to leave Ruff Town Records as people thought.

“The Ebony that I knew knows I did a lot for her and she will never do that,” he said.

However, rumours swirled following her death; one notably being that her relationship with Bullet had gone sour.

These rumours exploded after the CEO of Zylofon Media Nana Appiah Mensah tweeted that Ebony wanted to leave Ruff Town for his record label.

Bullet, however, dispelled rumours that he and Ebony ever had a fall out. “She never came anywhere to say Bullet did this or that. There was no interview that she badmouths me. Listen to all her interviews.”

He stated that in his short-lived relationship with Ebony, he never bullied her to do anything she did not want to do. “If anything, she was the one who dictated what she wanted to do.”

“If Ebony wanted to leave, it was because some people might have tried to win her over by giving her promises of money or convince her of better opportunities elsewhere,” he told Lexis Bill.

He stated artistes fall out with their management or groups mostly because the people around them convince them.

“You are the man, you’re doing everything and you can stand on your own,” he commented.

He also explained his introduction of Wendy Shay during the 2018 Ghana Music Awards had nothing to do with a sour relationship with Ebony.

“It was my award when I won the songwriter of the year that I introduced Wendy Shay [it was not to disrespect Ebony] and I know that all I did Ebony was going to be happy because she knew I loved to bring out the talent [in people].”

“Ebony was very close to my heart no matter what she did,” Bullet added.