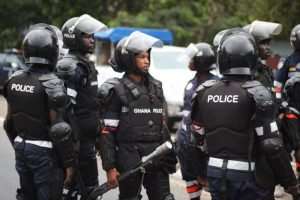 A 42-year old native of Japekrom and a father of five in the Jaman South District of the Brong Ahafo Region, Wofa Sina Atta, has been killed by gunmen believed to be from Drobo, a rival community.

The deceased, who’s well-known as the Mbrantehene (Youth Leader) of Japekrom, was among those leading the townsfolk including chiefs, as part of activities marking their Munufie Festival when the shooting took place on Wednesday afternoon.

About fifteen other natives of the town have also been injured in what appears to be shooting by snipers who were hiding in a storey-building, believed to be the Palace of the Drobo Chief, according to Police in the region.

Japekrom and Drobo, both twin towns, are said to have a long history of rivalry over land.

“According to them [Japekrom natives], it’s their spiritual River and they had to go and have a spiritual bath. And the same tradition also goes that when they’re coming back from the River they should walk. So gathering people in a bus from Japekrom to the Mpuaso area and coming to their town, on reaching a section of the road in front of the Drobo Palace, they got down from their vehicle and were about to walk. Ahead of them they saw a certain barrier. For that matter they were moving in convoy; they reached there and there was an attack from a storey-building which is the palace of Drobo.”

“From the shooting that came from the top of the storey-building, we’ve gotten about fifteen victims so far; and one has been pronounced dead. The name of the deceased is Wofa Sina Atta, 42 years, who’s said to be the Mbrantehene (Youth Leader) of Japekrom.”

He says investigations have immediately commenced into the incident to ensure that the culprits are arrested and brought to book.

“We’ve put our intelligence on the ground, and we believe that we will be able to arrest those who committed this heinous offence.”

In the meantime, he says several police officers and military personnel have been dispatched to the area to ensure law and order by averting reprisal attacks.

“We’ve galvanized about 60 men to go and augment the men who were on the ground because of the festival. So I can tell you that for now calm is returning to the area. I am sure that we will be able to cool the situation because those who planned and committed this offense are not for now within the vicinity. So the Berekum Police and those brought from Sunyani to the area are going to keep the clam with the SWAT team who were also called from Atebubu to come and support.”

Eyewitness account
Meanwhile, a native of Japekrom, Alhaji Amadu Osman Rafat, who survived the attack, told citinewsroom.com that the injured persons could not be treated at the Drobo Government Hospital which is closer, for fear of their attackers.

As a result, they had to be driven for about one hour to a Hospital in Sampa. He thus fears the death toll may rise.

He described the experience as a “war zone”, saying he was yet to locate some of his family members, as virtually all the residents of the town were running for their lives.

He added that the entire town is in a state of shock and fear, although military personnel and police officers have stormed the town.

He however wondered how some police officers, who had led them to the River, were suddenly nowhere to be found during the shooting.

Ruling on disputed land
In 2015, the legal tussle over land ownership between the two towns, is said to have been settled at the court, and ruled in favour of Japekrom.

But it appears natives of Drobo, which is much bigger than Japekrom, have not come to terms with the ruling of the court.

It is however unclear whether this attack is linked to that rivalry.