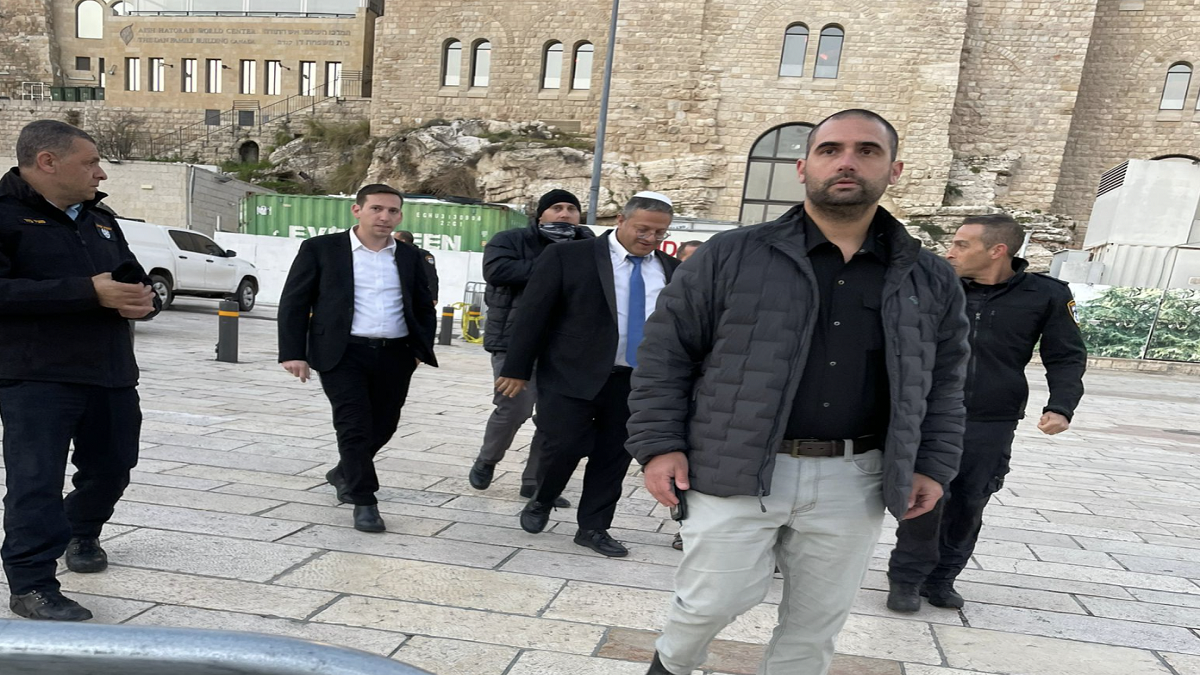 On Tuesday morning, National Security Minister Itamar Ben Gvir (Otzma Yehudit Party) ascended to the Temple Mount to commemorate the Tenth of Tevet, the fast day commemorating the siege of Jerusalem by Nebuchadnezzar that led to the destruction of the Temple. Former MK Rabbi Yehudah Glick asked whether this event may trigger Zechariah’s prophecy.

It was Ben-Gvir’s first ascent to the holy site since being sworn in as national security minister last week and marks the first time in five years that a sitting Israeli minister visited the Temple Mount. During his visit, the entrance for Israelis to the Temple Mount was blocked

“Our government will not surrender to threats from Hamas,” Ben Gvir said at the conclusion of his visit.

“The Temple Mount is the most important place for the people of Israel. We maintain the freedom of movement for Muslims and Christians, but Jews also go up to the site, and those who make threats must be dealt with with an iron fist,” he said.

Last night Ben Gvir held a situation assessment with the police commissioner and the Jerusalem District Commander and met with the head of the Shin Bet and they all determined that there is no obstacle for him to go up to the Temple Mount. Security officials who participated in the assessment of the situation also believed that capitulation in the face of the threats would be a reward for terrorism and legitimize future actions against Israel.

Netanyahu reportedly spoke with Ben-Gvir on Monday and gave his approval to the visit, with Likud confirming that the prime minister did not object to the pilgrimage after consultations with security officials.

Opposition head and former prime minister Yair Lapid on the other hand warned that if Ben Gvir went to the Temple Mount, “people would die.”

“Ben-Gvir must not go up to Temple Mount. It is a deliberate provocation that will put lives in danger and cost lives,” said Lapid. “As weak as [Prime Minister Benjamin] Netanyahu is, he must, at least this time, stand up and tell him, ‘You are not going to the Temple Mount.’ People will die,” he added.

“MKs go up [to the Temple Mount], ministers don’t — especially not the minister in charge of the National Security Ministry,” Lapid added in response to a reporter’s questions. “It will be viewed by the whole world as breaking the status quo, even if it’s not.”

Finance Minister Bezalel Smotrich responded to Lapid’s statement at a religious Zionism meeting on Monday, emphasizing that “going up to the Temple Mount is part of the status quo.”

Labor MK Gilad Kariv, a rabbi from the Reform Movement, warned that by ascending to the Temple Mount, Ben Gvir was promoting the same type of policies that led to the destruction of the Temple by the Babylonians.

“Particularly on the fast day of the 10th of Tevet, it is important to remember that the connection between political extremism, intoxication from power and government corruption led to the destruction of the Temple,” Kariv said in a statement. “Standing up against these phenomena is essential to guaranteeing the future of Israel.”

“Netanyahu bears responsibility for this attack on al-Aqsa,” the PA said in a statement.

Hussein al-Sheikh, the secretary general of the Executive Committee of the Palestine Liberation Organization, called for an international response to the visit.

“[Ben-Gvir] brazenness necessitates a Palestinian, Arab and international response,” he said. “This is the first step of this government and its occupation policy.”

“Netanyahu’s invasion of the Western Wall, which included Talmudic ceremonies, alongside Ben Gvir and the criminal announcing of his intention to invade al-Aqsa Mosque, express the arrogance of the fascist settler government and its intentions to further the raids on al-Aqsa and divide it. These escalations in al-Aqsa are like the fuse of an explosive device. The Zionist occupation government will bear the consequences, and our people will confront these acts of stupidity and provocations with bravery, not allowing the occupation’s plans to go through.”

“Today the People of Israel mark the Tenth of the month by fasting,” Rabbi Glick said in a comment. “Today, thousands of years later, our new Minister of National Security ascended the Temple Mount, the heart of the sovereign State of Israel.”

Rabbi Glick referred to a verse in the Book of Zechariah

“Is this what we are seeing unfolding in front of our eyes?” Rabbi Glick asked. “I am praying to Hashem, God Almighty; Let it be.”

Rabbi Yehuda Levi, Co-founder of High on the Har and Director of Outreach for Yeshivat Har Habayit, praised Ben Gvir’s actions, saying it should be the “rule and not the exception.”

“It’s about time that a minister of the Israeli government ascended to the Temple Mount,” Rabbi Levy said. “It is the holiest site in Judaism and the fact that most ministers do not ascend and have never even been to the site is a much more shocking story that should be in the news today.  What Ben Gvir did is praiseworthy and should be the rule, not the exception.”

“We are putting out a call for all the MKs and Ministers to do the same. This sends out an unmistakable message that we are not afraid to go to our holy sites. No Israeli politician would go into an election without visiting the Kotel (Western Wall) but it should be that they go to the Temple Mount, which is the real heart of the Jewish people.”

Tom Nisani, CEO of Beyadenu for the Temple Mount, congratulated Ben Gvir’s ascendence to the Mount:

“Minister Ben Gvir deserves all the respect for ascending the Temple Mount and not capitulating to Hamas’ threats. The sun keeps shining and the Middle East isn’t on fire. Even if there are those who would try to ignite the area, the time has come to truly be a free people in our land, including the Temple Mount.”