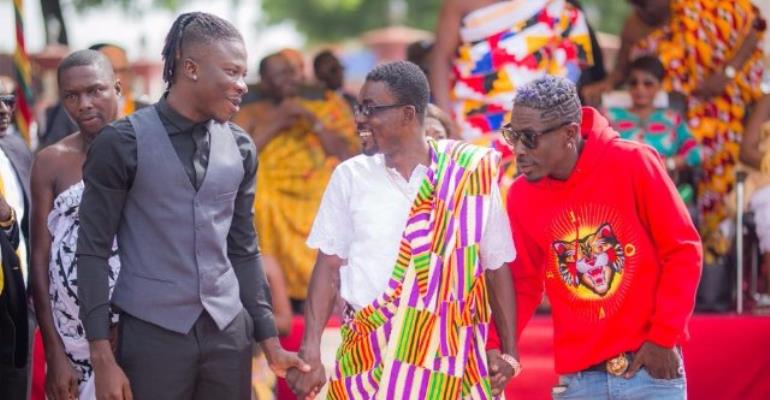 CEO of Zylofon Media, Nana Appiah Mensah (in Kente) with some of his signees, Stonebwoy, Shatta Wale

The creative arts sector has always been crying out for financial support and that is why when Zylofon Media entered the scene, it was greeted with welcome sighs by industry players. Zylofon Media signing of artistes; Becca, Kumi Guitar, Stonebwoy, Joyce Blessing, Shatta Wale, Obibini; actor including Bibi Bright, Benedicta Gafah, Toosweet Annan, James Gardiner, Zynell Zuh as well as fashion designer, Sima Brew, generated a lot of excitement.

Its various divisions such as Zylofon Music, Zylofon Movies, Zylofon Arts Club, Zylofon Arts Fund, Zylofon Cash, as well as Zylofon Radio and Zylofon TV, made players believe that things were about to finally get better for the entertainment sector. And for a while there, it seemed everything was going fine.

Then its sister company, Menzgold, started experiencing challenges that led to it being shut down by the Securities and Exchange Commission late last year and now there are fears that Zylofon Media could go down because Menzgold is considered the cash cow in the conglomerate.

For some industry players, the creative arts scene will be dealt a big blow should Zylofon Media be allowed to go down. Music producer, Fred Kyei Mensah told Showbiz that should not happen.

“Its collapse will affect the entertainment industry greatly. The radio and TV station alone gave a lot of artistes the platform to advertise their craft.

The signing of Becca, Shatta Wale, Kumi Guitar, Stonebwoy, Joyce Blessing and Obibini brought some vibrancy into the industry,” he said.

According to him, there were a lot of projects ongoing at Zylofon Media and it would just be bad if they should all go down the drain.

“The Zylofon Cash, NAM Missions and other affiliate bodies of his conglomerate indeed helped. His philanthropic mission to other people such as the late Jewel Ackah was exceptional,” he added.

Movie producer, Mustapha Adam of AA Productions, who together with other industry players such as Chief Moomen benefited from the Zylofon Arts Fund, said the last thing anyone should wish for was Zylofon’s collapse.

He said the movie industry, which was near collapse, received some revival because of the Zylofon Arts Fund which loaned monies to movie producers and distributors.

“I benefited a lot and so did my colleagues who are working with the monies given to us. I am currently on set shooting some series and it’s all because of the funding I got from Zylofon. Zylofon is doing a great job and my prayer is that it does not collapse looking at what is happening.

“Apart from the entertainment industry, a lot of people have been employed and it will be sad to see all these people jobless,” he said.

President of the Musicians Union of Ghana (MUSIGA), Bice Osei Kuffour, popularly known as Obour, said Zylofon came in just when the industry was crying for help.

“Zylofon TV and Zylofon Radio alone serves as the only radio and TV stations which do wholly entertainment. The likes of Stonebwoy and Shatta Wale benefited greatly from Zylofon. Shatta Wale’s Gringo won an award at the AFRIMA because of its big-budget video,” he said.

Obour said he was aware Zylofon was close to completing a huge theatre complex which would solve the challenge of lack of venues.

“The Accra International Conference Centre, The National Theatre and the Fantasy Dome are always booked for shows during festive occasions and the Zylofon theatre would have helped greatly,” he added.